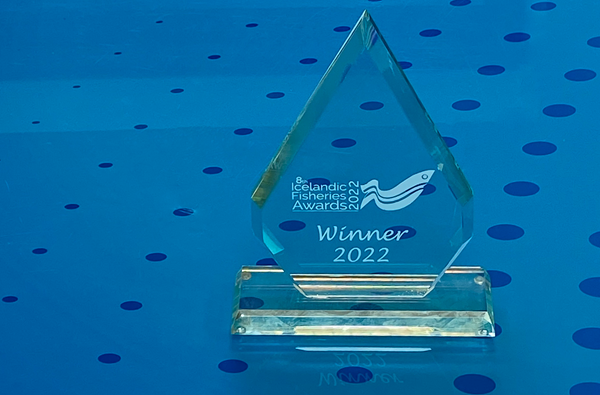 Hampiðjan played a central role at the industry awards, a key part of the IceFish exhibition which took place last week in Kópavogur.

The company took the award for the Best New Product Launched at the Exhibition. Guðmundur Gunnarsson, who retired recently after a fifty-year career with Hampiðjan, received the Lifetime Achievement Award, while Faroese fishing and aquaculture gear supplier Vónin, part of the Hampiðjan Group, was selected as the Best Overall Supplier. 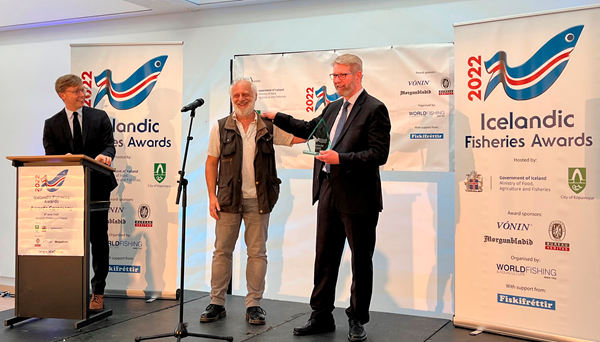 ‘This has been a very long development process to get a fibre-optic cable to function under some extremely challenging conditions, and the cable has now been successfully tested. We know this works, although there is some work still in progress to fine-tune specialised winches to handle the cable on board,’ Hjörtur Erlendsson said, accepting the award for the Best New Product Launched at the Exhibition.

He commented that this opens up a wealth of new opportunities for undersea electronics in both fisheries and other sectors.
‘This provides possibilities for so far unheard of data transfer rates from gear-mounted electronics. It can be compared to going from dial-up internet to lighting-fast broadband as data is transmitted to the skipper’s screens  from sonars and other equipment.’ 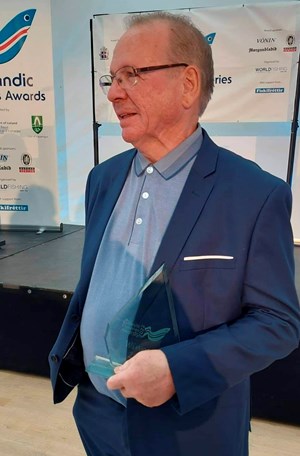 Fifty-year career
Selected for the Lifetime Achievement Award, Guðmundur Gunnarsson has worked on the net loft floor, managed sales and been involved in fishing gear design during his long career at Hampiðjan.
Recently retired, he is best known as the Godfather of the Gloria, the pelagic trawl design initially pioneered in the late 1980s and developed with a number of skippers to target deep-sea redfish off the south-west Iceland. This was a milestone success for Hampiðjan, and the principles of that original Gloria design have been adapted and refined over the ensuing years, tailored to meet the demands and conditions of numerous fisheries around the world.

‘For me it’s a great honour to receive the Lifetime Achievement Award from Marianne Rasmussen-Coulling, events director of the Icelandic Fisheries Exhibition,’ he said.
‘I have spent practically my whole career working with fishing gear, including fifty years at Hampiðjan in Reykjavík. This was where I quickly found that I had opportunities to be innovative in developing, testing and improving fishing gears as part of Hampiðjan’s production team. This was all done in close o-operation with many skippers, crews and owners, both in Iceland and around the world. It goes without saying that my fantastic colleagues over the years at Hampiðjan deserve a significant share in this award that has come to me. I’d like to take the opportunity to thank all of these people for their collaboration, and to give them my best wishes.’ 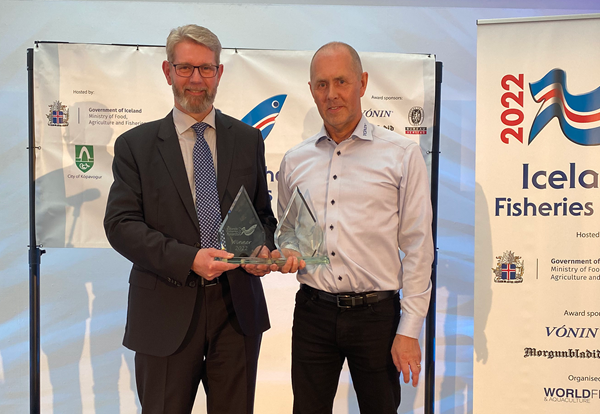 All-round quality
Faroese fishing gear and aquaculture equipment supplier Vónin, part of the Hampiðjan Group, was chosen as the Best Overall Supplier, as a leader in innovation in a number of fields, as well being active across the North Atlantic region.
In recent years Vónin has expanded into trawl door design and production, allowing the company to become a complete supplier of trawl gears for pelagic, whitefish and shrimp fisheries. Its Storm and Tornado trawl doors have been shown to be among the best on the market today, and its new Twister doors are designed to incorporate new levels of innovative fishing technology.
Vónin’s aquaculture division has been a significant supplier to the salmon sector, developing its expertise alongside the Faroese salmon industry as it has evolved over recent decades, with its own cages, mooring systems and more that have been supplied both in the Faroes and increasingly to export markets.

The company’s most recent expansion is to establish a branch on the Isle of Skye in Scotland, central to the growing Scottish west coast aquaculture sector where Vónin’s systems have proved themselves and are in demand.