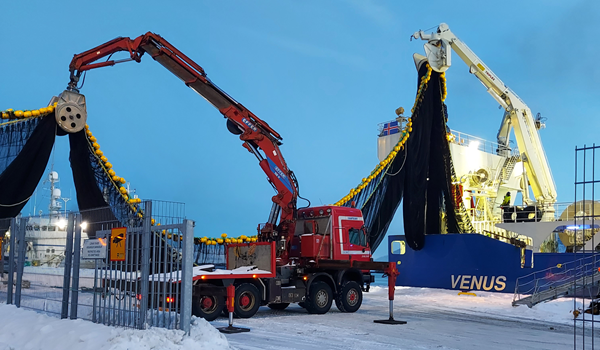 ‘We started fishing of the Skarður shore and were off Alviðruhamrar when we called it a day and headed back to port. The catch was 1800 tonnes, taken in four shots. The new shallow purse seine worked extremely well and performed exactly as expected,’ said Bergur Einarsson, skipper of pelagic vessel Venus.
It’s around a week since the Icelandic capelin fleet switched from pelagic trawl to purse seine gear, and Bergur said that the new shallow purse seine from Hampiðjan had been taken on board before they sailed from Reykjavík. 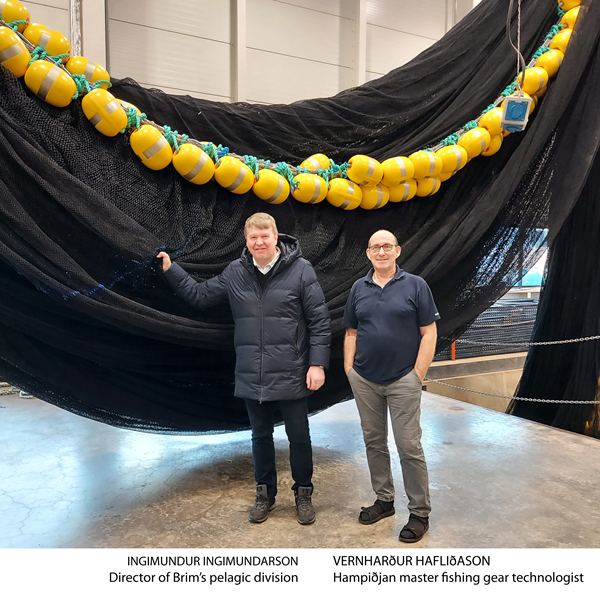 The new purse seine has an 524 metre corkline and the vertical depth of 126 metres, providing a 1:4 proportion that is ideal for casting in a circle around a mark of capelin in shallow water. The fishing gear weighs 40 tonnes and it was spooled on board at Hampiðjan’s Skarfagarðar net loft in Reykjavík last weekend.
This shallow purse seine is very robustly constructed in heavy-duty twine sizes from 210/36 up to 210/72 in the bag to be able to withstand the tensions that are generated when fishing in shallow waters.
‘We’re fishing down to 80 metres and as shallow as 10 metres along the southern part of the shoreline around Iceland,’ Bergur said. 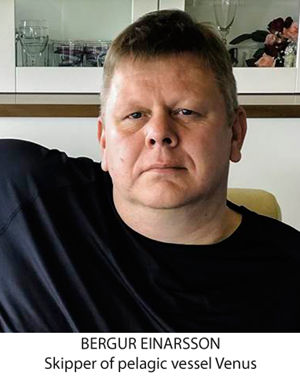 The corkline is rigged with 3600 purse seine floats to counteract the weight of the net in the water, and there is practically a double row of floats along the whole corkline.
With the exception of the triangle, the mesh size throughout the purse seine is 19.60mm, and there are approximately 5100 meshes per square metre of stretched mesh.
‘The purse seine performed well both when shooting and pursing, and it hauled very evenly through the power block and into the net bin,’ Bergur said.

‘This 1800 tonnes was taken in just four shots. The capelin is very good, roughly equal parts male and female fish, and the roe content has reached 15.70%. This is ideal for production and the catch is going for whole freezing,’ he said.

A storm is now forecast for the capelin grounds at least through to Wednesday and according to Bergur, there were already storm-force winds at midday today.

‘The capelin are moving fast and I expect they will have reached the Westman Islands by the time we get back to sea,’ Bergur Einarsson said.