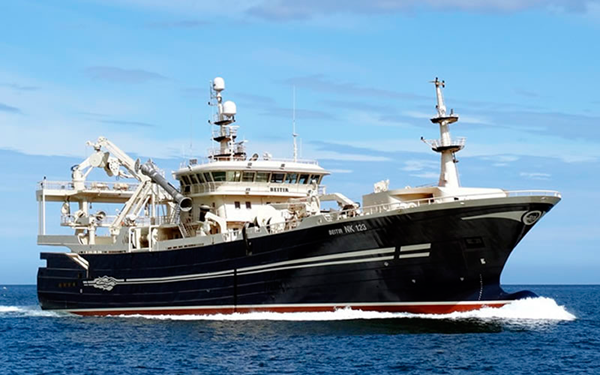 ‘I’m very satisfied with this new trawl. There’s virtually no gilled fish in the eight-panel belly and all the fish we see in the wheelhouse on the sounder makes its way back to the codend.

We’re very satisfied with the belly arrangement. It appears to open more effectively and the opening is excellent all the way back to the codend,’ said Tómas Kárason, who skippers Beitir opposite Sturla Thórðarson, commenting on the 2432 metre Gloría Helix blue whiting trawl from Hampiðjan that has served them and the crew of Beitir exceptionally well through the winter and spring fishery.

He is more than satisfied with the design of the gear and stated that they get considerably more catch in this new trawl, compared to similar designs they have used in the past. Their catch in six trips to blue whiting grounds has totalled 16,000 tonnes. This is equivalent to and Tómas said that the tank capacity on board is for 3200 tonnes of fish. 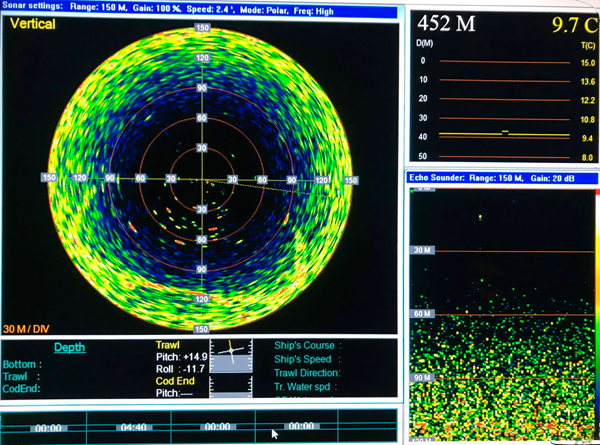 ‘We took delivery of the trawl at the end of last year and we had one blue whiting trip before switching to capelin. Then we went back to blue whiting, and that fishing is over for the moment. Next is mackerel and we aim to start on the 20th of June. There are a few pelagic vessels searching well off the south coast, but nothing has been reported yet.’
The new trawl achieves a 120 metre vertical opening and a 240 metre horizontal spread. The door spread ranges from 360 to 390 metres depending on the door depth while towing.
Toe-end weights are 2500 to 3000kg and are hung on each lower wing end. Beitir uses a pair of 14.50 square metre Admiral pelagic doors, each weighing 4200kg. The 180 metre sweeplines are made in overbraided 31mm DynIce Dux.

‘To begin with, we were catching better with this trawl compared to other gears in use. The proportion has dropped, partly because there are other pelagic vessels that are now using this type of gear.
Towing depth doesn’t seem to make any difference. In January we were towing a lot at 300-500 metre depths, and more recently we have been working up to 120 metres,’ he said, adding that their experience with the blue whiting codend has also been very good. 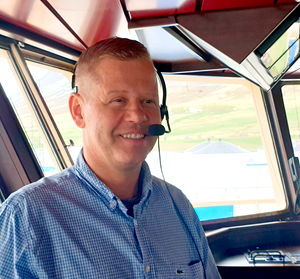 ‘We’ve mostly been using the lighter codend and that’s really done well. It’s a codend designed for 600-700 tonne catches. If there’s a lot going on and we can expect bigger bags, then we can switch over to the heavier codend. That one is designed for bigger tensions, such as we experience off Rockall and off Ireland. The heavy-duty codend is designed for 900-1100 tonnes and it’s often better for short, sharp tows,’ Tómas Kárason said, adding that he hopes to be able to try out the blue whiting trawl on mackerel this summer, considering how well this gear performed recently high in the water at around 120 metre depths.