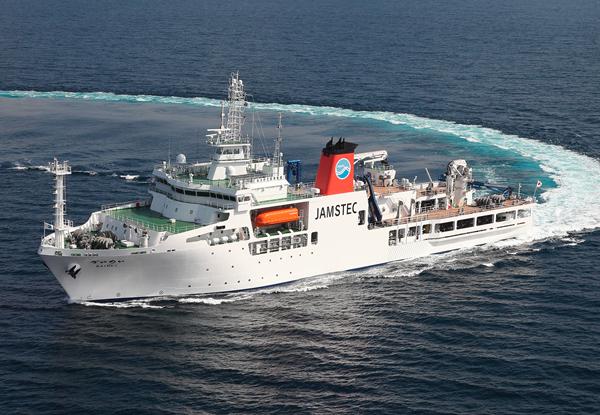 Research vessel Kaimei, operated by Jamstec (Japan Agency for Marine-Earth Science and Technology), has set a record by drilling into the seabed at a greater depth than has even been done before.

This was achieved with the use of a specialised drill that was lowered to a depth of 8 kilometres using DynIce Warp supplied by Hampiðjan Offshore. Lowering the drill into position on the seabed took two hours and a 37 metre deep shaft was cut to retrieve a sample of seabed geology showing the layers in the rock. These layers are studied and analysed to obtain a greater understanding of past earthquakes and other natural disasters, such as tsunamis, which have occurred in the region.

The sample hole was drilled close to the origins of the earthquake that shook the region in 2011 with a force 9.1 quake. The resulting tidal wave caused widespread damage in Japan, including the destruction of the Fukushima nuclear facility. 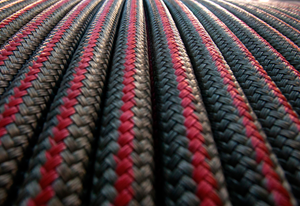 The DynIce Warp used for this operation is a single, unspliced 12 kilometre length that was delivered to six years ago to Jamstec, and which has been in regular use ever since, mainly in similar assignments.

RV Kaimei is one of many marine research vessels that use DynIce Warp, and numerous single 12 kilometre lengths of DynIce Warp have been produced and delivered in recent years. The reason for the 12 kilometre length for marine research is that the world’s deepest undersea canyon, the Challenger Deep in the Marian Trench south-east of Japan, is 10,994 metres deep and many vessels participating in deep-sea research need to reach that depth.

Steel wire rope is not an option for this kind of operation, as this parts under its own weight at around 6 kilometres.
DynIce Warp for research vessels is produced with a slight negative buoyancy, depending on the required depth. The tension during deployment and retrieval depends on the weight of the instruments in use, and the greatest tension occurs as a drill sample is lifted from the bore hole at the end of each drilling operation.

DynIce Winch Warp was originally developed as an alternative to steel wire warps for fishing vessels. This enables a reduction in the consumption of fossil fuels, has a longer working lifetime and reduces the likelihood of accidents on board. This is the most widely used rope for marine research, and is also in widespread use on dredgers and on one windlasses and winches of all kinds around the world. Apart from fisheries uses, the main users of DynIce Warp are in Asia.

Hampiðjan Offshore is a subsidiary of Hampiðjan and specialises in applications outside the fisheries and aquaculture sectors. Hampiðjan Offshore’s primary markets are in the oil industry, supplying super-strength rigging used for windmill installation on land and at sea. The company has its own sales activity in Europe and has agents around the world.