Fish move faster down to the codend 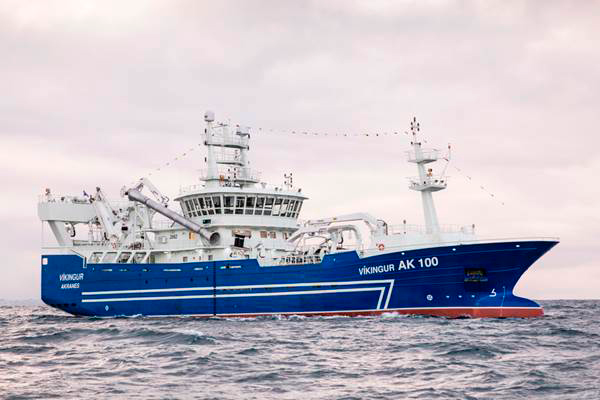 ‘I’m very happy with the new blue whiting trawl. My feeling is that it fishes better than other gears I’ve tried, and the main reason is that the belly is designed so that fish make their way more quickly down to the codend,’ said Albert Sveinsson, skipper of Brim’s pelagic vessel Víkingur.

This past winter and spring he and his crew have been working with a new 2304 metre Gloría Helix blue whiting trawl from Hampiðjan.
With sister ship Venus, Víkingur sailed from Reykjavík to search, along with Hoffell, for mackerel along the edges south of Iceland. According to Albert Sveinsson, the Icelandic pelagic vessels are taking turns searching, but so far little has been seen.

He commented that the blue whiting trawl is larger than their previous gear. The belly is made in eight panels and it’s not easy to define the spread and vertical opening, as the trawl mouth is more rounded. Víkingur tows its gear with 160 metre sweeplines. The spread between the doors is 330 metres and a pair of 13 square metre MLD doors were used for the blue whiting fishery. 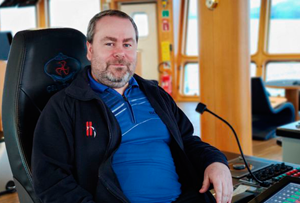 Although the trawl is designed for blue whiting, Albert Sveinsson said that it can also be used on herring, especially when the herring are lying deep. DynIce Data sounder cable is also part of the setup on board Víkingur.
‘I’ve used DynIce Data cable since I was fishing on Faxi, and I can wholeheartedly recommend it. It’s much lighter to tow than the old steel cables. Those always sank under their own weight.
When we’re fishing for mackerel, the DynIce Data cable practically lies on the surface. It has also performed well on the herring and blue whiting fisheries. When we’re fishing for blue whiting we often to at 250 to 400 metre depths and sometimes we’ve had to tow the gear even deeper than that to find fish,’ Albert Sveinsson said.