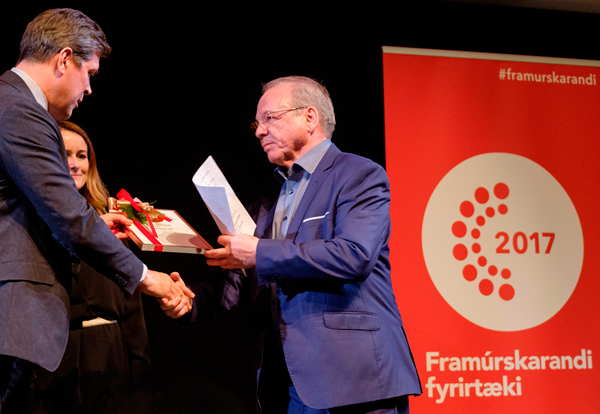 Hampiðjan’s fishing gear development manager Guðmundur Gunnarsson recently retired after a 50-year career with the company during which he has been involved in producing fishing gear and in numerous developments, but there’s no doubt he is best known for designing the Gloría pelagic trawl, which was a significant innovation at the time and revolutionised Iceland’s pelagic fisheries. He needs no introduction among trawler skippers and long ago took his place as a national treasure. But let’s hear what he has to say about his own career.

‘To begin with, I signed up on 1st May 1965 as an apprentice at Netagerð Eggerts Theódórssonar, which was in the Alliance building in Reykjavík. I qualified as a netmaker in 1968, and joined Hampiðjan on 11th May 1970.’
He said that back then Hampiðjan was housed in a series of interconnected buildings on Stakkholt, the oldest of which went back to 1934. At the time Hampiðjan had a workforce of 200.
Today Hampiðjan’s headquarters are by the Skarfagarður quayside in Reykjavík, comprising offices, net loft and stores.
Hampiðjan Ísland was established recently to manage the company’s home market, which accounts for around 15% of its turnover. Overseas activities and sales account for 85% of turnover. The staff in Iceland and at the 28 subsidiary companies in 15 countries now number more than 1100.
Guðmundur started among the net loft staff working with netting production, heatsetting, and preparing spare parts for groundfish trawls. Alongside this he provided technical advice to skippers and the many net lofts there were at that time in Iceland. In 1983 he took over as Hampiðjan’s sales manager and continued in this role up to 2001 at which point he focused entirely on fishing gear development, and has remained the company’s fishing gear development manager right up to his retirement earlier this year.
He commented that there is no comparison between today’s industry and how things were when he began, as the development has been on an unparalleled scale.
‘Take the fishing gear as an example. The old Granton trawl that most trawlers used for many years had a stretched mesh fishing circle of 55 to 60 metres. The largest trawls today are the Gloría pelagic trawls that have a 3072 metre fishing circle. 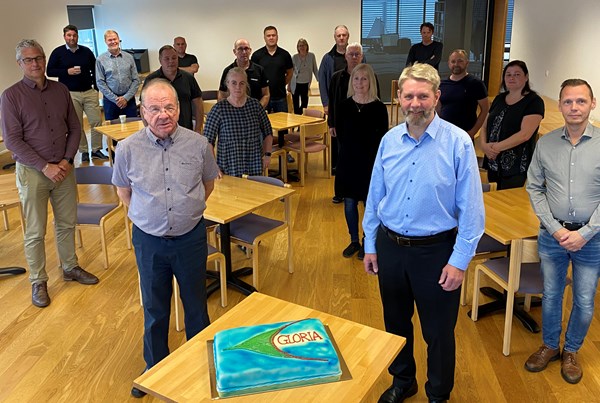 We asked him to pick some of the key events from a long career.
‘The introduction of stern trawlers around 1970 comes to mind. Then there’s the 1983 quota legislation, the offshore shrimp fishery that started around 1980 and the offshore redfish adventure from 1989 onwards, and the arrival of the new generation of trawlers that began in 2000.’
´When I joined Hampiðjan there was practically no export at all of trawl netting, but this began to increase around 1974-75. That was when we started to export to the Faroes and to Denmark, and after that to Canada in 1977. There was a major advance when steam heat treatment became a reality in 1976, as before that netting had little knot stability and meshes would be stretched and pulled out of shape. This development meant that at that time Hampiðjan’s netting was the best there was, and there was a big increase in sales in the subsequent years.’

‘Our undersea research into demersal trawls in co-operation with the Institute of Marine Research and Netagerð Vestfjarða began in 1986. The results led to some important advances once we were able to see how trawls performed under tow. Gear design improved and gear damage was reduced a great deal when we were able to even out the tensions on net panels and eliminate hot spots and slack netting.’
‘This enabled us to become very successful in fishing gear development. As an example, fishing gear usage from the side trawler era to today has dropped by 90%, while the efficiency of demersal trawls has increased by 60-70%, alongside more effective trawlers, developments in navigational instruments, the arrival of trawl sensors and other fishing gear technology. This has given us some outstanding results in environmental terms and improving the way marine resources are respected.’
‘It has always been an aim to improve the selectivity of fishing gears and one of the most significant steps has been when we developed the use of DynIce Quicklines with T90 netting. These two together yield a more constant quality and the open meshes allow undersized fish to escape and grow in the future.’ 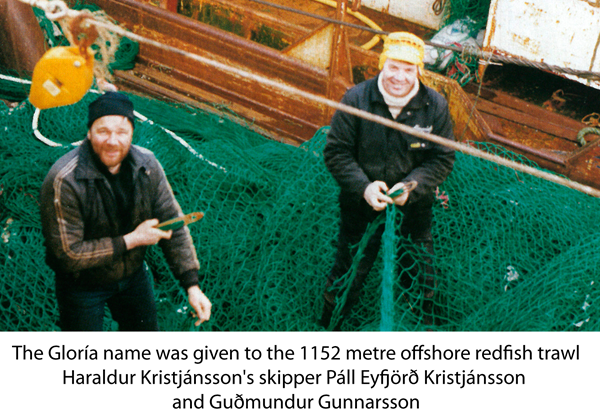 The Gloría pelagic trawl for redfish was designed and developed in 1989 and the Helix self-spreading ropes and DynIce ropes and netting became part of this a few years later. This made possible a quadrupled fishing area with the same towing power, with a huge increase in efficiency, along with an accompanying reduction in fuel consumption. With the Gloría trawl, Hampiðjan was successful in entering the market for pelagic gear, and this has been introduced with great success around the world.
‘For me it has been an extremely valuable experience to have the chance to work at Hampiðjan, and to have an opportunity to see how the materials used in fishing gears are produced, and to become familiar with the techniques and expertise behind all this.’
‘It was very memorable, being able to travel abroad as a young man to get to know the fishing gear business around the world. At Hampiðjan I’ve had the opportunity to research, develop and design demersal and pelagic trawls. I also had the chance to go to sea to be part of putting these gears to work and to help make these the outstanding fishing gears that Hampiðjan produces today. Participation in exhibitions and sessions at the flume tank have also played a big part in all this, along with getting to know customers and colleagues, many of whom are my closest friends today.’

How many managing directors have you worked with over these fifty years?

‘There have been six. Hannes Pálsson was the director when I joined. Then Magnús Gústafsson took over. He was followed by Gunnar Svavarsson, Hjörleifur Jakobsson, Jón Guðmann Pétursson and current CEO Hjörtur Erlendsson. These have all been talented and capable managers, which is reflected by the situation in which Hampiðjan is today,’ Guðmundur Gunnarsson said.